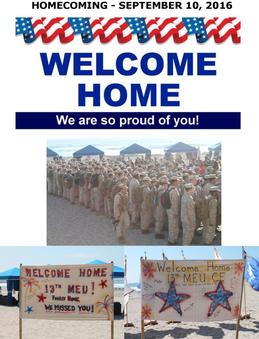 Jane Wayne Day is an event that lets those in attendance experience what it's like to be a Infantry Marine. It is a family-friendly event which includes a static display of combat equipment, vehicles and weapons, a demonstration of military working dogs and a simulation of the M240, MK-19, M2 and M9.  Participants are also able to test their physical endurance on the MEU's "Combat Fitness Test Maneuver Under Fire" lanes !!!

For an album of pictures of various events, please click here!

Congratulations to Sgt Major Slade on his retirement after 31 years of service to the Corps.  The committee wishes the Slade family the best of luck and much love as you move on to the next chapter of your lives.  It has been an honor working alongside you and your family in our support of the Marines, Sailors and families of the 13th MEU.

WELCOME HOME to the 13th MEU !!!   The MEU arrived home on September 10 from a 7-month deployment !  Another successful and safe deployment !