The city of Anaheim adopted the 13th Marine Expeditionary Unit in a formal adoption ceremony here March 29.  The ceremony included a performance by the 3rd Marine Aircraft Wing Band and pass and review conducted by the Fighting 13th.  Prior to the parade, Col. David Coffman, the 13th MEU commanding officer and Anaheim Mayor Curt Pringle gave speeches to the Marines of the 13th MEU and citizens of Anaheim.

“The significance of this event is that we establish a relationship with a city that will be long standing,” explained Sgt. Maj. Enrique X. Hines, the 13th MEU sergeant major. “The residents of Anaheim have Marines they can call their own.”  According to Hines, the adoption makes the city part of the 13th MEU’s extended family and provides a mutual support network between the unit and the city.  “I feel with our successful ceremony we will become even closer,” Hines explained.

Carolyn Walters, a member of the adoption committee and Anaheim citizen, could not say enough about the Marines of the 13th MEU. Walters was present to watch the Marines march on the small parade field outside of city hall.  “The people in the MEU I have met so far have made us so proud,” Walters said.

Thirteenth MEU Marines attended the Young Men’s Christians Association Good Friday prayer breakfast in Anaheim on March 21. 13th MEU Marines received a standing ovation during their introduction to the community, according to Walters.  “When that happened I felt like a den mother,” she said. “I felt so connected to the Marines with the MEU.”

Walters is no stranger to the Marine Corps herself. Her son is currently deployed in support of Operation Iraqi Freedom operating in the city of Ramadi.  She feels her outlook is shared with the other members of the Anaheim community.   “I have not yet met a person who was not thrilled about the adoption,” she said.

The Marines with the 13th MEU also showed optimism in the future relationship with the city of Anaheim.   “Our MEU serves as the heart and soul of the Marine Corps,” said Lance Cpl. Sopo U. Toilolo, an administrative clerk with the 13th MEU. “It’s important when we deploy to have the support of our community to motivate us.  It also gives the citizens a chance to truly understand the values of the Marine Corps and what it is the Marines do", Toilolo continued.

Hines added by illuminating how the ceremony helped explain what the Marine Corps is.  "I think the ceremony demonstrates that there are real faces behind the uniform,” Hines said. “Marines are moms, dads, sisters and brothers and most of all young men and women with an awesome amount of responsibility and a sense of pride that's unparalleled.”   Hines said members of the community complimented on both the professionalism and courtesy of the Marines at the ceremony. As a former drill instructor, he feels it’s one of the most important things instilled in Marines from day one.  “I received many comments that praised the Marines as polite and disciplined. This was an honor to hear, because the one goal of the Marines Corps is not just to make warriors and win wars, but to make great citizens of our Marines,” he said.

Following the ceremony Marines were treated to a locally catered meal and raffle, featuring gifts from local Anaheim businesses, including Angels baseball, Disneyland, the Anaheim Marriott, Bubba Gump Shrimp Company restaurant, and the Embassy Suites.  Citizens lined up to purchase 13th MEU t-shirts and coins so they could proudly wear the logo of the Fighting 13th. Shirts were also purchased to outfit a local little league baseball team with new uniforms. A team fittingly named, “The Leathernecks.”

The city’s adoption demonstrates why the U.S. Marine Corps is considered by many to be the world’s most elite -- fighting sons and daughters with not only the best equipment and training but, most importantly, its citizen’s support. 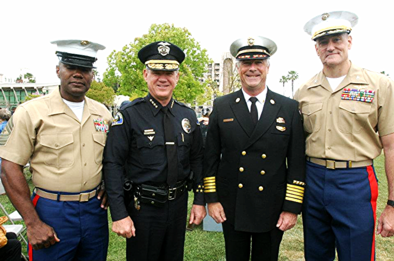 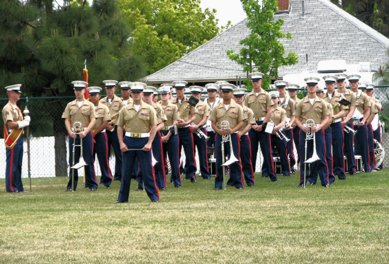 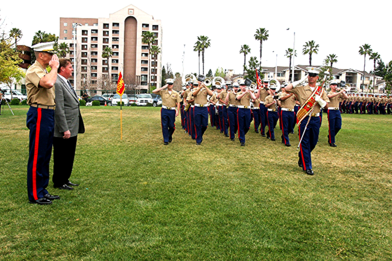 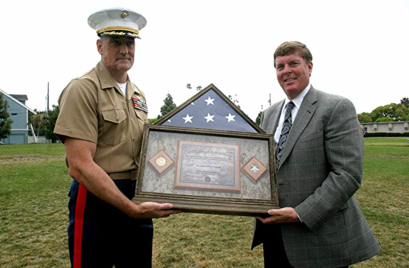 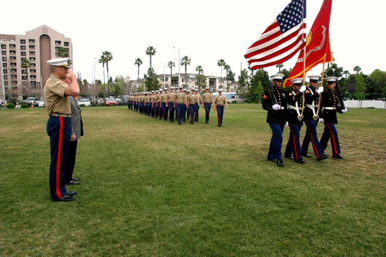 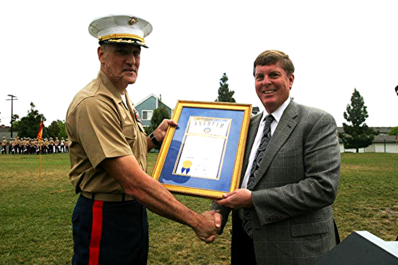 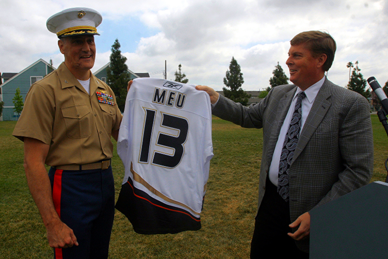 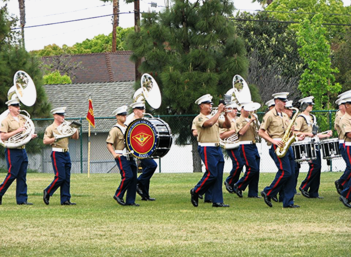 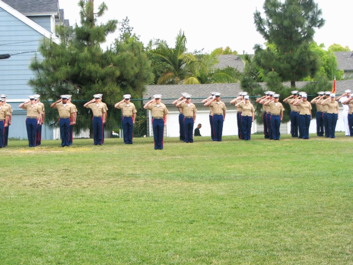 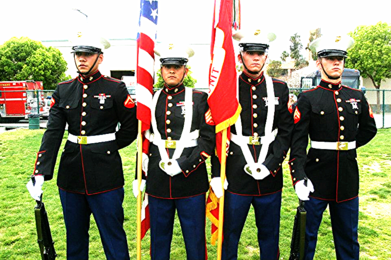 Colonel David Coffman and Curt Pringle observe and salute as the 3rd Marine Aircraft Wing marches by during a Pass and Review parade.